On March 16th 2021, the Kimberley Process Civil Society Coalition will bring both ends of the diamond supply chain together in the first of a series of virtual events aimed at surfacing the experiences of communities living in diamond mining areas with members of the jewelry industry.

Participants will hear directly from individuals negatively affected by diamond mining, from the Kimberley Process Civil Society Coalition, and members of the jewelry and diamond industries.

Individually, mining communities and retailers may have little leverage over the industry and governmental actors that have set the seemingly intractable rules of the game. But as the African proverb says “If you want to go fast, go alone. If you want to go far, go together”.

Let us come together to develop a new, unified voice in the conversation around the responsible sourcing of diamonds. Any ideas, inputs, comments and questions from participants to this webinar will be much appreciated.

Shamiso is the Deputy Director at ZELA and the global Coordinator of the Kimberley Process Civil Society Coalition. He holds a Masters in Law (LLM) in Constitutional and Human Rights Law from Midlands State University. He also holds Bachelor of Laws Honours (LLBS) Degree from the University of Zimbabwe and a Certificate in Environmental Law from the IUCN Graduate Environmental Law Programme. Shamiso is registered with the High Court of Zimbabwe as a legal practitioner, notary public and conveyancor. He has  over 18 years working experience in the extractive, mining, agriculture and natural resources sectors. He has also published several research papers on the role of parliament in playing an oversight role in the mining sector, including training for parliamentarians in Zimbabwe and Malawi.

Ibrahim is a community member and activist living near the large-scale Koidu diamond mine in Sierra Leone. He was shot during a protest calling on the mine to relocate their community as the mine’s continuous blastings make life impossible.

Farai Maguwu is devoted to improving the governance of natural resources in Zimbabwe. In 2010 he was arrested for his human rights work, and detained for 40 days by the Zimbabwe Government. Human Rights Watch honoured him with the Alison Des Forges Award for Extraordinary Activism. He was also honoured by Rapaport, a clean diamond campaigner, for protecting artisanal diamond miners in Zimbabwe’s Marange region. In 2012 he founded the Centre for Natural Resource Governance, which researches and documents human rights abuse and seeks to halt illicit trade in minerals. Farai is a holder of an MA in Peace and Conflict Studies from the European University Center for Peace Studies in Austria and is currently a PhD candidate at Wits School of Governance in Johannesburg

Saskia Shutt is a Belgian-British jewellery designer, who creates bespoke jewellery in silver, gold and platinum, for women and men. Her 22-year career as an independent jeweller includes teaching the next generation of Belgian jewellers, as well as exhibiting her work in Belgium, and other European countries.  Saskia was nominated for the International Arts, Crafts & Design Awards, 2014 and 2015 as well as being nominated Belgian Craftsperson of the Year 2019. Her work has also featured in fashion shoots and television.

Iris Van der Veken is Executive Director of the Responsible Jewellery Council (RJC). The RJC has more than 1300 member companies that span the jewelry supply chain, from mine to retail across 73 countries. Iris has a background in law and international relations, and has worked in technology, diamonds, jewellery, fashion, and government.  She initiated and Chaired the United Nations Global Compact Network Belgium. She was honoured by the Belgian Ministry of Foreign Affairs, Foreign Trade and European Affairs for her leadership role in initiating the Global Compact Network Belgium and for her work on promoting corporate social responsibility in Belgium and abroad with a focus on human rights including children’s rights and the role of business. She has been a volunteer for Special Olympics for over 30 years.

Edward Asscher is in his second term as President of the World Diamond Council (WDC), which represents the diamond industry in the tripartite Kimberley Process coalition. Edward is also vice president of the European Council of Diamond Manufacturers and is a past president of both IDMA and the International Diamond Council (IDC), a diamond standards-setting organization affiliated with both IDMA and the World Federation of Diamond Bourses (WFDB). Asscher holds a doctorate in economics, and until he recently retired, helmed his family’s historic Royal Asscher Diamond company, which has cut and sold diamonds for 167 years.

Christina Miller, founder Christina T. Miller Consulting, LLC, is a sustainable jewelry consultant providing education, guidance, and strategy to help jewelry companies improve lives, NGO’s to connect directly with jewelers, and guide creatives looking to be leaders in positive social and environmental action. In 2018 Miller was awarded the Women’s Jewelry Association’s Carelle Grant with which she launched Better Without Mercury/Mejor Sin Mercurio. In 2004 She co-founded Ethical Metalsmiths (EM) and led the non-profit organization for eleven years. During her EM tenure Miller helped secure the first ever multi-jeweler Fairmined gold purchase in the US. Christina is also a metalsmith, and was the Assistant Professor of Jewelry and Metalsmithing at Millersville University, where she transformed the jewelry and metals curriculum to include responsible sourcing and entrepreneurship. 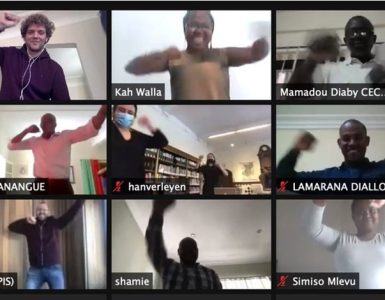 2021 was despite COVID-19-related restrictions again a very busy year for the Kimberley Process Civil Society Coalition (KP CSC). Listing all activities undertaken by our 13 member organisations working in 10 different... 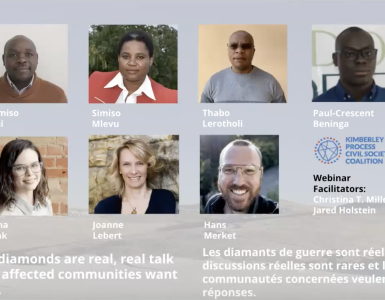 The Kimberley Process Civil Society Coalition (KP SCS) organized a webinar on October 20, 2021, the second in the ‘We Need to Talk About Diamonds’ campaign. This webinar specifically provided the context for the release... 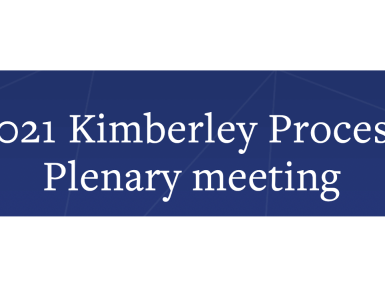 “We are getting used to being disappointed about the lack of progress in the seemingly endless discussions on updating the KP’s conflict diamond definition. We now know everybody’s arguments and...

Highlights of the strategic NGO meeting on diamonds

Coming up: new publications on the Artisanal Diamond mining sector