In its closing remarks at the Kimberley Process (KP) Intersessional meeting in Botswana, the KP Civil Society Coalition (CSC) deplored the incapacity of the certification scheme to address its demons. It finds the KP ship rudderless, or actually sinking.

The Kimberley Process failed to address the elephants in the room. These elephants are not only the question of whether the KP can continue to certify Russian diamonds as conflict free, but also, more generally, how this process and its certification system could be able to break the link between diamonds and violent conflict more generally. A small group of participants abused their veto to prevent everyone else from discussing these questions that are critical for the future of the KP.

In order to break this veto deadlock, the KP CSC took matters into their own hands and invited Participants and Observers to a side session on addressing the shortcomings of the KP. With a small number of committed participants and the fellow observers of the World Diamond Council, views were exchanged on how to make an end to the abuse of the KP’s consensus model in which a small minority holds everyone hostage. The KP CSC also challenged the confidentiality rules and the absence of mining communities in debates directly impacting them.

And of course, the need to broaden the conflict diamond definition to capture todays challenges reemerged as a prominent priority for a future reform agenda. However, many shared civil society’s view that engaging in a new reform attempt, without being able to have inclusive discussions on why reform is essential but never succeeds, would just be a distraction. It would be an effort doomed to fail and only serve to divert attention away from the KP’s inability to genuinely break the link between diamonds and violent conflict.

“We are leaving this Intersessional meeting with big questions on which purposes this body still serves. It has a mandate to break the link between rough diamonds and armed conflict but cannot even engage in a discussion on whether and how it is doing that.

On Monday, during the opening session, Botswana’s Minister of Mineral Resources Lefoko Moagi, called on all of us to engage in even the most uncomfortable discussions. This body has failed to follow his guidance. A small group of Participants have blocked all others from discussing the elephants in the room. These elephants are not only whether the Kimberley Process can keep certifying Russian diamonds as conflict-free, but also more generally how this process and its certification scheme can be made fit for purpose in breaking the link between diamonds and violent conflict.

As all of you know, the KP CSC is the longest-standing demander for KP reform. However, we are very concerned that diving into a review and reform cycle, without being able to discuss why reform is so pressing or why the previous reform cycle was such a failure, is a distraction. It is a façade to pretend to the outside world as if the KP has matters under control and is addressing them. But the truth is that it doesn’t. The KP has no control. The ship is rudderless, or actually sinking. As long as the KP is not able to address its demons, it would be a waste of our precious time and resources to invest in a demanding reform process that would have no chance of success.

In order to break the veto stalemate, we yesterday took the initiative ourselves to invite Participants and Observers to a discussion on the shortcomings of the KP. It is unfortunate that so many Participants did not take the opportunity to engage, but we thank those who did, including our fellow observer of the World Diamond Council.

The opposition we faced in getting this simple discussion organised was a sobering reality check of how the KP gives substance to the tripartite arrangement. Of how fearful some in this process are to give a platform to civil society that allows it to express its views and concerns. All those who participated agreed however that such exchanges are meaningful, needed and useful. It should be normal to have open discussions like these. In the light of this good experience, we call on the current and all future KP Chairs to provide a slot in every Intersessional and Plenary meeting to allow Observers, from civil society and industry, to expand and engage on the points they raise in their opening and closing speeches.

We commend the Botswanan Chair’s choice of topic of this Intersessional of ‘Diamonds as a Catalyst for Sustainable development’. We would have loved to engage more on this important issue. The KP was established in order to get rid of and prevent conflict associated with diamonds but also to use these diamonds as assets for sustainable development. The greatest recipients of the troubles of mining, the ones who should see its benefits most are the local mining communities. But where are they in the discussions at KP meetings? Why do we continue to talk about them in their absence? Why can’t they be at the table to share with us their stories, to know whether we are making progress or not?

We cannot continue to ignore them and still claim to be doing well. Let the communities be at the centre of KP events at all levels, starting with the upcoming November Plenary meeting.” 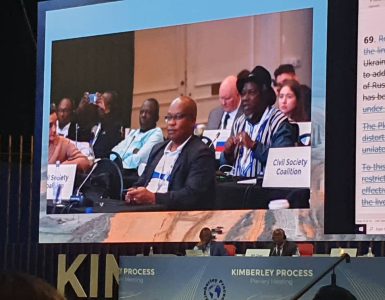 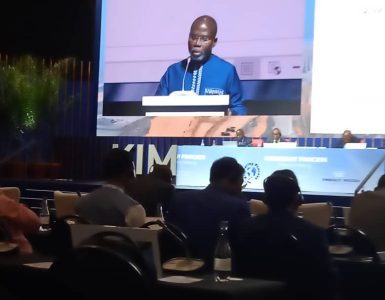 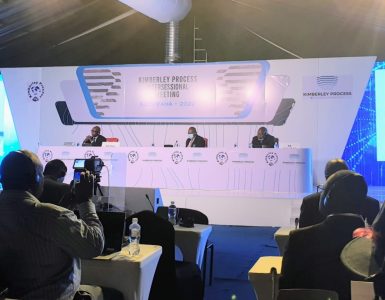