A Plenary meeting of the Kimberley Process Certification Scheme (KPCS) will be held in Botswana from November 1st to November 4th, 2022, amid growing concern about the scheme’s ineptitude to address the ever-evolving forms of conflict in diamond-producing and trading nations. As the KPCS celebrates its 20th anniversary next year (2023), most diamond mining communities in Africa and the people of Ukraine will be counting lost human lives, environmental damage, and human rights violations caused by diamond mines or by states whose budgets are heavily funded from diamond production and trade.

The KPCS has turned a blind eye to the environmental, socio-economic and security risks posed by mining activities to communities. This has resulted in perennial complaints from communities like Maluti in Lesotho, marginalised affected property owners of Koidu in Sierra Leone and communities living along Tshikapa and Kasai Rivers in the Democratic Republic of Congo. The fate of the Jagersfontein community in South Africa, where burst tailings dams flooded and displaced communities, may be similar to what awaits many other diamond mining communities worldwide, particularly in Africa where most of the rough diamonds are produced.

The Kimberley Process Civil Society Coalition (KP CSC) notes that the Kimberley Process intervenes only when rough diamonds are used by rebels to fight governments, ignoring the predicaments of communities affected by the actions or omissions of state and non-state actors that include displacements, environmental damage and violence, including the use of diamond revenues to maim women and children and annexing territories in other sovereign countries. This leaves diamonds tainted by other types of violence or conflict to flow onto the global market, certified ‘conflict-free’, as with diamonds from Russia. We call on the KP to be empathetic to the suffering masses of this world whose pain is funded by proceeds from diamonds, whether rough or polished.

The KPCS has made it a habit to hop from one failed reform cycle to another and cannot even discuss problems that concern everyone, hiding behind a redundant scope of the definition. The people in African communities affected by diamond mining bear the brunt, as do the people in conflict-torn Ukraine, while the KPCS watches in silence.It is unacceptable that despite the diamond sector’s enormous economic contribution to the global economy, African-producing countries remain comfortable having host communities wallow in poverty and various forms of abuse and injustice. The KP CSC therefore, calls on the KP  to stop oversimplifying ‘conflict-free’ claims and abusing the consensus decision-making model and to finally agree on a long overdue expansion of the KP’s conflict diamond definition to include diamonds associated with widespread or systematic violence and serious violations of human rights, regardless of whether they are committed by rebel groups, criminals, terrorists, private or public security forces or any governmental actor. 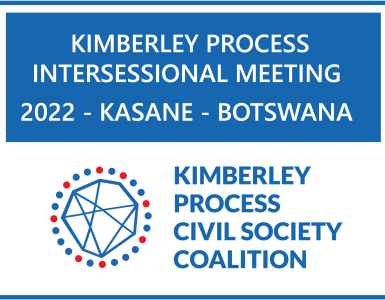