The Kimberley Process (KP) being unable to even discuss whether it should continue certifying Russian diamonds as conflict-free, proves what the KP Civil Society Coalition (CSC) has been denouncing for years, namely that the world’s conflict diamond scheme is no longer fit for purpose. We call on the KP, that is meeting in plenary session from 20 to 24 June in Botswana, to (1) finally agree on widening the scope of the KP’s outdated conflict diamond definition, (2) suspend the Russian Federation as KP Participant until it unconditionally ends its aggression against Ukraine, and (3) adopt a serious and meaningful reform agenda.

Russia’s unprovoked aggression against Ukraine, its accumulation of serious violations of international human rights and humanitarian law, its continued choice for war over de-escalation, and the reported links between Russian diamonds and this conflict, completely erode the credibility of the KP Certification Scheme (KPCS), which claims to guarantee a conflict-free diamond trade. This situation is moreover making the functioning of this process entirely impossible, as infighting blinds the KP even more to the violence and human rights abuses that continue to harm communities affected by diamond mining in several KP member countries.

The Intersessional meeting in Botswana, where the 85 KP Participant Countries will be meeting together with industry and civil society observers, therefore comes at a critical time for the KP and the diamond sector. Never before was this conflict prevention scheme, mandated by the United Nations to break the link between diamonds and conflict, confronted with one member waging war against a fellow member country. The fact that several participants are turning to unilateral measures to stop diamonds from funding this conflict, clearly demonstrates how the KP and its Certification Scheme have reached their limits.

The lack of international coordination is plunging the diamond sector into the deepest crisis since the blood diamond challenges of the late 1990s, which lay at the basis of this very process. Diamond industry associations are being torn apart over their ties with Russia’s state-owned miner Alrosa and several of the world’s largest diamond and jewelry companies have, in the absence of international sanctions, decided to unilaterally stop sourcing Russian diamonds, which represent one third of the world’s diamond supply.

Considering these unprecedented challenges, the KP CSC calls on KP Participants to:

Preventing diamonds from funding conflict is the core of the KP’s mandate, as highlighted in the United Nations Security Council Resolution 1459 of 2003. Yet, despite concerns raised by governments, businesses, consumers and civil society, there has, four months since Russia’s war against Ukraine started, not been a single discussion within the KP on this matter, let alone that any action would have been considered.

Russia and its allies are posing their veto against discussing this matter at the Intersessional meeting in Botswana. They argue that the KP is a technical process that shouldn’t have to deal with political issues. At the same time, they are relying on this technical process to maintain consumer confidence in diamonds.

Consumers are finding it ever more difficult to understand the KP’s silence and inaction on Russian diamonds. This is because they have been told for two decades that this scheme assures the conflict-free nature of their diamond purchases, without being explained that these assurances rest on an outdated and awkwardly narrow definition of conflict as rebel insurgency. At the very minimum the KP owes these consumers, and the public at large, transparency and a clear explanation as to why it keeps certifying Russian diamonds as conflict-free.

Basically, this is because a few member countries have blocked all reform efforts during the past twenty years. This deliberately kept the mandate of the certification scheme so narrow to allow it to certify the maximum volume of diamonds with the absolute minimum of requirements. Today, it is clear that change of the KP can and will not happen with the old recipes of consensus-building. Governments and industry actors that are serious about reform will have to use all the leverage they have to ensure that this crisis does not become the end of this process, but rather the start of a stronger conflict prevention mechanism that takes its responsibility in genuinely breaking the links between diamonds and conflict across the globe.

* The KP defines conflict diamonds as “rough diamonds used by rebel movements or their allies to finance conflict aimed at undermining legitimate governments”.

** KP certificates are assigned to parcels presented for export, often consisting of hundreds or even thousands of rough diamonds.  When diamonds from two or more different countries are mixed together in such a parcel, which is standard practice in trading hubs, they have to be exported with a KP certificate of mixed origin which no longer mentions the countries from which these diamonds originated. 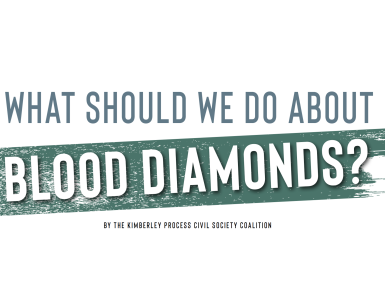